HEALTHCARE AND YOUR COMMUNITY – Over 50 people attended a Community Conversation on Healthcare in Burnsville on May 17, 2018, sponsored by the N.C. Justice Center and hosted by SEARCH at the First Baptist Church.

Reid and Mimi Duncan were part of the welcoming committee, signing people in and giving out name tags.  Rev. Tommy James welcomed us and gave the invocation.

Thanks for letting us use First Baptist’s Fellowship Hall for the great meal prepared by Yummi America Cafe and provided by the NC Justice Center.

Nicole Dozier, Director of the Health Advocacy Project and Sharon Evans, her associate who founded the N.C. Baby Love Program, spoke on the topics of Medicaid, the Affordable Care Act, and Becoming a Health Care Advocate.

Nicole Dozier brought the audience up to date on the Medicaid program in North Carolina and gave statistics about the number of uninsured in the state.  She also brought projections for Mitchell and Yancey counties of the number of jobs that would be created and the amount of additional income generated by the year 2020 if the Medicaid program were expanded.  About the Affordable Care Act, she expressed her opinion that it would not be dismantled because so many current legislators had had a stake in crafting it.  These paper fans were some of the handouts that Nicole and Sharon brought.

Sharon Evans, who advocates for healthcare for children, spoke about the services currently available to children (but not their parents) in low income families.  She touched on Baby Love, the program that ensures prenatal and up to 60 days postnatal care for mothers.  Both women spoke of the gap that has left 400,000 North Carolinians without health insurance. 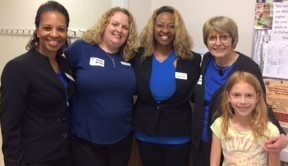 The N.C. legislature having just reconvened, Dozier and Evans gave tips on how to talk with elected officials and left behind handouts with specific suggestions.  Here are some of the documents they presented. 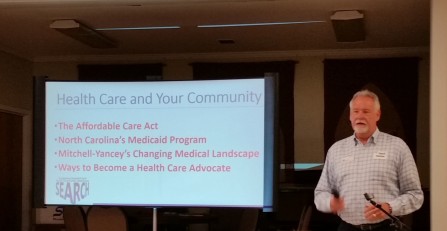 Chuck Shelton, Executive Director of Mountain Community Health Partnership (MCHP), led the discussion of Mitchell-Yancey’s changing healthcare landscape. Shelton invited Becky Carter, CNO of Blue Ridge Regional Hospital, to join him and take questions about the pending acquisition of the Mission System by HCA, Hospital Corporation of America.  Among those questions was why HCA?  She responded that Mission realized that in order to remain financially viable in the coming years they needed to ally with a larger system, and they issued a Request for Proposal to certain systems.  HCA’s response was selected unanimously by the Mission board as the best.

Other questions centered on charity care, the local ambulance service, and the rural nature of our hospital vs. the urban nature of HCA-owned hospitals. A questioner wondered if the four hospitals that are currently designated as Critical Access Hospitals would retain their special status in such a large system. There were several questions on the foundation to be created from the proceeds of the sale.

Chuck Shelton described MCHP’s model and aspirations.  These include establishing locations in Spruce Pine and Burnsville and providing dentistry services. He mentioned that the Sisters of Mercy plans to bring a clinic to Burnsville, but neither he nor Becky Carter had more information about it.  He said that MCHP is working on an alliance with the Yancey County Health Department.

SEARCH has created a list of essential healthcare services for Mitchell and Yancey counties, copies of which were circulated for those present to consider, and the majority of those present signed on affirming their agreement to the list.  The document can be downloaded here.  SEARCH’s Essential Services 2018.05.17

On behalf of SEARCH, Susan Larson thanked the N.C. Justice Center for sponsoring the event.  The minutes from the meeting will be posted on this site on the “Meeting Minutes” page soon.